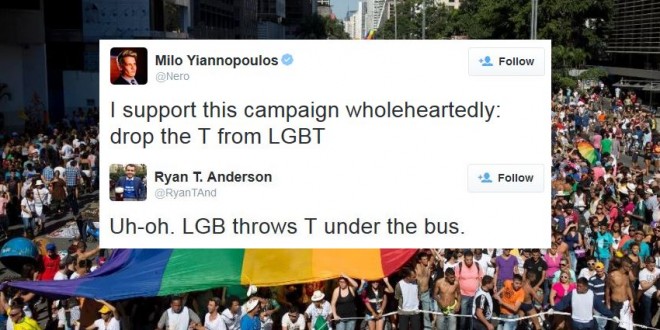 Douchenozzle homocon and Breitbart columnist Milo Yiannopoulos is backing a disgusting Change.org petition launched yesterday which calls on LGBT organizations and media outlets to “drop the ‘T’ from LGBT.” The anonymously authored (how brave!) petition, which comes in the wake of the Houston vote, begins:

We are a group of gay/bisexual men and women who have come to the conclusion that the transgender community needs to be disassociated from the larger LGB community; in essence, we ask that organizations such as the Human Rights Campaign, GLAAD, Lambda Legal and media outlets such as The Advocate, Out, Huff Post Gay Voices, etc., stop representing the transgender community as we feel their ideology is not only completely different from that promoted by the LGB community (LGB is about sexual orientation, trans is about gender identity), but is ultimately regressive and actually hostile to the goals of women and gay men.

The petition has 643 signatures at this writing. Prominently featured at the bottom of the petition is the above tweet from Yiannopoulos.

And once again the Quislings who ride the coattails of progressives to civil equality, all while supporting our mortal enemies, show us their true faces.