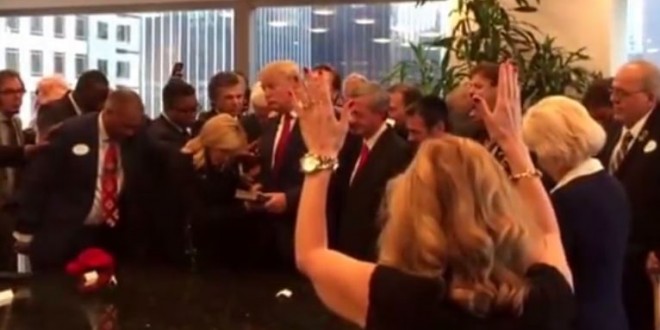 Loony Preachers Lay Hands On Donald Trump, Guaranteeing That Jesus Will Vote For Him [VIDEO]

A caravan of cuckoo Christian crackpots careened into Trump Tower in midtown Manhattan today where notorious mascara addict Jan Crouch and other Bellevue escapees laid hands upon His Holy Donaldness, totally guaranteeing that Christ Himself and every other white person will vote for him. Christian Broadcast News has the cast list:

Among the attendees were televangelists Kenneth and Gloria Copeland, conservative evangelical Christian Pastor David Jeremiah, TBN religious broadcaster Jan Crouch, Pastor Paula White, Jews For Jesus Rabbi Kirt Schneider and Pastor Darrell Scott. The meeting lasted roughly two and a half hours and ended with pastors gathering around Trump and laying their hands on him in prayer. Kenneth Copeland, Paula White, and Rabbi Schneider prayed during that time, asking the Lord to give the GOP presidential frontrunner wisdom, stability and knowledge necessary to pursue this endeavor. They also prayed for America and for God’s will to be done. During the meeting, he talked about his Christian faith. At one point he admitted that he may not have read the Bible as much as the pastors in the room. As the conversation continued, a few of the ministers implored Trump to tone done some of his harsh rhetoric.

Previous Fiorina: I Never Said Gay Marriage Is The Law Of The Land (Except That Time She Totally Did) [AUDIO]
Next CLAIM: Pope Francis Secretly Met With Kim Davis & Her Husband, Told Her “Thank You For Your Courage”