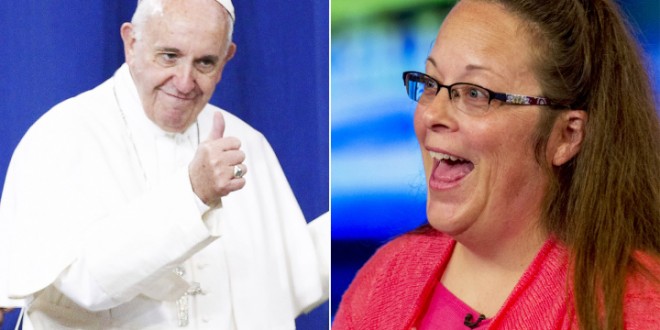 CLAIM: Pope Francis Secretly Met With Kim Davis & Her Husband, Told Her “Thank You For Your Courage”

According to an unconfirmed claim by the unofficial website Inside The Vatican, Pope Francis secretly met with Kim Davis and her husband Joe Davis at the Vatican Embassy in Washington DC last Thursday. The Pope reportedly embraced Davis and thanked her for her “courage.” From the report:

Pope Francis entered the room. Kim greeted him, and the two embraced. There is no recording of this conversation, or photographs, as far as I know. But “there is not any thing secret that shall not be made manifest, nor hidden, that shall not be known and come to light.” (Luke 8:17) Kim Davis gave me this account of the meeting shortly after it took place. “The Pope spoke in English,” she told me. “There was no interpreter. ‘Thank you for your courage,’ Pope Francis said to me. I said, ‘Thank you, Holy Father.’ I had asked a monsignor earlier what was the proper way to greet the Pope, and whether it would be appropriate for me to embrace him, and I had been told it would be okay to hug him. So I hugged him, and he hugged me back. It was an extraordinary moment. ‘Stay strong,’ he said to me. Then he gave me a rosary as a gift, and he gave one also to my husband, Joe. I broke into tears. I was deeply moved. “Then he said to me, ‘Please pray for me.’ And I said to him, ‘Please pray for me also, Holy Father.’ And he assured me that he would pray for me.” Joe told Kim that he would give his rosary to her mother, who is a Catholic. And Kim then said that she would give her rosary to her father, who is also a Catholic. Vatican sources have confirmed to me that this meeting did occur; the occurrence of this meeting is not in doubt.

Hit the link for more. At this writing there is no outside confirmation that the meeting took place. BarbWire and the Liberty Counsel are already breathlessly reporting the claim as absolutely factual.

Previous Loony Preachers Lay Hands On Donald Trump, Guaranteeing That Jesus Will Vote For Him [VIDEO]
Next Vatican Refuses To Confirm Or Deny That Meeting With Kim Davis Actually Happened: “No Statement”