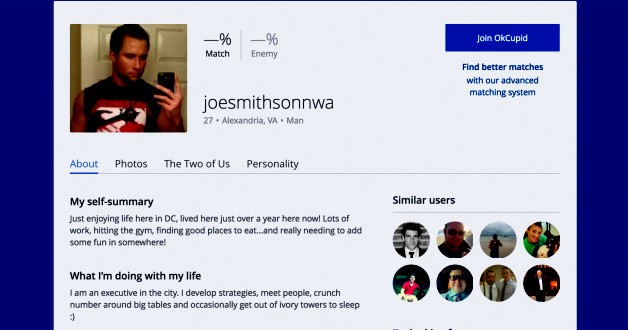 The picture is obviously not of Josh Duggar. And as of right now, it appears on WordPress under the title “random guy from Facebook.” If you search “random guy” on Google images, the same photo comes up as one of the very first results. So if a man in his 20s were to try and find a discreet, anonymous photo for a social media profile, it’s possible he’d find this one. It’s also worth noting that, on this OKCupid profile, “Joesmithsonnwa” claims to be looking for “casual sex” while simultaneously describing himself as a “strictly monogamous” type. “Joesmithsonnwa” last appeared online in September of 2014 (around the same time Josh J Duggar’s credit card stopped paying for the first Ashley Madison account), and “Joesmithsonnwa” lists his location as near where Duggar, his wife, and their three children lived in Oxon Hill, Maryland—that is, until they moved back to Arkansas when scandal hit. What’s more, his occupation is listed as “politics,” and Duggar was the Executive Director of the Family Research Council at the same time this profile was active.

The profile notes that the user is a non-smoking, non-drinking, non-drugging Christian. Praise His name! Glory!