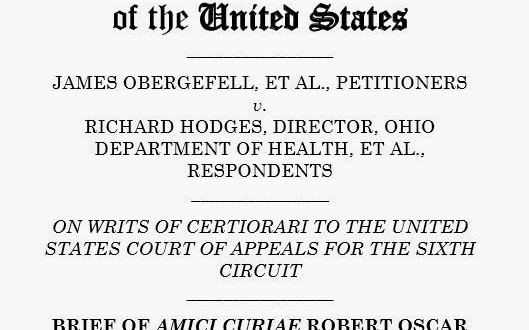 Robert Oscar Lopez To SCOTUS: Stop Same-Sex Marriage Because Gays Are Being Just Horrible To Me

Homocon horcrux Robert Oscar Lopez has filed an amicus brief with the Supreme Court in which he argues that same-sex marriage must not be approved because gay writers like me have just been horrible to him. An excerpt:

The history of the gay community lashing out at people who have been raised by gay parents is long, ugly, and shocking. This brief affords me limited space, so here I would like to present a few examples to the Court based on my firsthand experience. Zack Ford a journalist with ThinkProgress, has called me “anti-equality.” Jeremy Hooper, who worked long-term with the Gay and Lesbian Alliance against Defamation (GLAAD), called me “anti-gay.” Ty Cobb, an employee of the pro-gay Human Rights Campaign, sent an email to all of his concern’s members (more than a million people) naming me as someone with un-American values, an “exporter of hate.”  Ford and Hooper stated these things on their respective editorial sites: namely ThinkProgress and Good as You. Other sites including Frontiers LA, Right Wing Watch, Raw Story, Towleroad, Equality Matters, Huffington Post, JoeMyGod, and Human Rights Campaign have reinforced this labeling of me. These labels have been attached so ubiquitously to my name that any search on Google of “Robert Oscar Lopez” will take an Internet surfer to stories of my “anti-equality” and “anti-gay” crimes against the gay community. As a result of this online association between my name and anti-gay bigotry, I have lost speaking engagements, been physically mobbed at venues such as Catholic University of America, and faced harassment at my job, at social events, and at professional conferences including ones that have nothing to do with any gay issues.

According to Lopez, all those verbatim quotes we’ve been posting are out of context or have been deleted from his site. Therefore he really didn’t say those things. Or something. (Tipped by JMG reader Str8 Grandmother)

PREVIOUSLY ON JMG: Last month Lopez declared that gay activists are incentivizing home-wreckers. Also last month Lopez declared that gay parents like Elton John are disgusting terrorists. In December 2014 Lopez filed an amicus brief with the Eleventh Circuit Court in which he opposed Florida marriage because gays have been telling lies about him. In September 2014 Lopez compared the Human Rights Campaign to the Khmer Rouge. Also in September 2014 Lopez petitioned the Fifth Circuit Court of Appeals to stop gay marriage in Texas because he used to be a prostitute. In April 2014 Lopez filed an anti-gay amicus brief in support of Virginia’s ban on same-sex marriage. In March 2014 Lopez declared that gay men are turning surrogate mothers into breeding slaves. In 2013, in addition to appearing on stage at an anti-gay Manif Pour Tous rally in France that was supported by neo-Nazis, Lopez testified against LGBT equality before several state legislatures and he co-signed an anti-gay homocon brief to the Supreme Court in support of DOMA. You really must read the Media Matters take on Lopez’ trilogy of gay erotica.