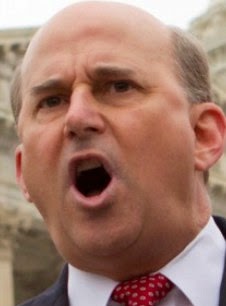 Louis Gohmert: I’m Not Backing Ted Cruz Because I Might Run For President Myself

Conservative firebrand Rep. Louie Gohmert (R-Texas) told The Hill that he might run for president in 2016. Gohmert indicated he might launch an exploratory committee for president when originally asked if he would support Sen. Ted Cruz’s (R-Texas) White House bid. “Ted is a good friend and would be an outstanding President; however, I haven’t ruled out an exploratory committee myself,” Gohmert said in a statement to The Hill. Gohmert launched long-shot bids for Speaker in January and for chairman of the Republican Study Committee, a group of House conservatives. But the Texas Republican accrued just three votes during the Speaker election — from himself as well as Reps. Jim Bridenstine (R-Okla.) and Randy Weber (R-Texas).

The above-linked piece notes that Gohmert holds the 2014 House record for extemporaneous speeches mostly delivered to an empty chamber, babbling for 29 hours. The next-closest House rep spoke for 10 hours during last year’s session.