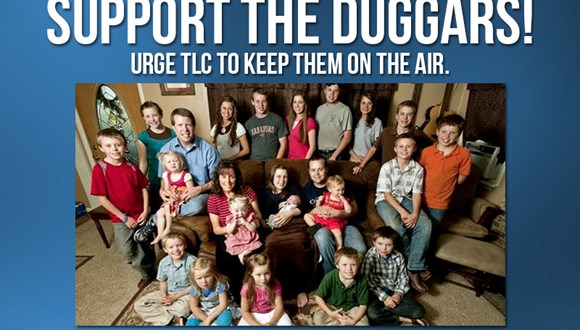 Via email from the American Family Association:

Dear Supporter, Rabid homosexual activists have made America’s favorite family enemy Number One. The Duggar Family from TLC network’s 19 Kids and Counting has shared their strong Christian faith with millions of families across America for years. They are unashamedly pro-life and Christ-centered. Because of their uncompromising stand on marriage and abstinence, the homosexual lobby has drawn a bully bead on Jim and Michelle Duggar. Gay activists are publicly labeling Jim and Michelle with words like “ignorance” and “fear mongering.” In the past week, homosexuals launched a very frightening and fast-growing petition asking TLC to cancel 19 Kids and Counting. Already, their hate-filled petition has gathered 130,000 signatures, thanks to the liberal media’s propaganda machine. TLC needs to know you support the Duggars and 19 Kids and Counting! If TLC hears from enough Christians, they will not even consider canceling the show. Our goal is 1,000,000 signatures by Christmas!

Anti-gay activists have also launched a Twitter campaign at #DefendTheDuggars. What are you waiting for?

UPDATE: Somebody’s ever so pissed about our little project.

Previous GAMBIA: President Signs Bill Making Gay Sex Punishable By Life In Prison
Next NOM Vows To Stop Same-Sex Marriage Even If It Takes Them A Hundred Years