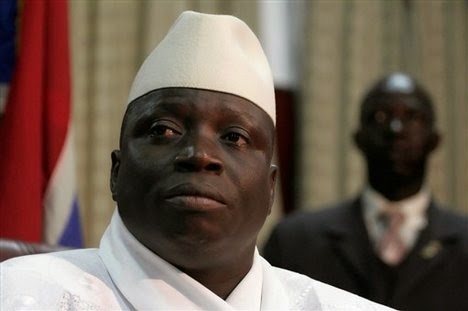 Gambian president Yahya Jammeh has signed a bill that makes homosexuality punishable by life in prison.

The law targets those with a previous conviction for homosexuality, those living with HIV, and same-sex partners of people with disabilities – all of whom could be imprisoned for life. Zeid Ra’ad Al Hussein, the U.N. High Commissioner for Human Rights, said on Thursday the law violates fundamental human rights – among them the right to privacy, to freedom from discrimination and freedom from arbitrary arrest and detention. “I call on The Gambia to fulfil its international obligations to promote and protect the human rights of all persons without discrimination, to repeal all provisions of the Criminal Code that criminalise relations between consenting adults and to put in place an immediate moratorium on arrests on the basis of such laws,” he said in a statement.

PREVIOUSLY ON JMG: Gambian president Yahya Jammeh declares that his nation “will fight homosexuality like we fight malaria.” Jammeh is named one of 2013’s worst anti-gay villains by Human Rights Watch. Jammeh compares himself to Mohammed because he has “cured” 68 AIDS patients with herbs. Jammeh says no amount of foreign aid will bring LGBT rights to Gambia. Jammeh threatens to decapitate “any homosexuals found in Gambia.”