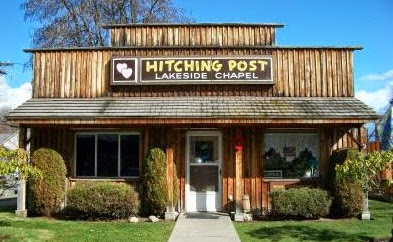 In an attempt to swat away reports that Alliance Defending Freedom and its allies have consistently lied about the Hitching Post situation in the tiny Idaho town of Coeur d’Alene, the ADF has posted a response to the letter sent them on Monday by the town’s attorney. First, an excerpt from the town’s letter:

And here is how the ADF is spinning that.

“The city has said explicitly, repeatedly, and publicly that it would prosecute a for-profit business. That’s what the Hitching Post is, and it has never claimed to be anything other than that,” said ADF Senior Legal Counsel Jeremy Tedesco. “While the Knapps do operate a ministry, they charge a fee for the ceremonies in order to be able to make a modest living. Therefore, the city, in its letter and elsewhere, is admitting that it would prosecute these pastors, who are clearly under a present threat of being sent to jail, fined, or both. The city has had months to figure out its own ordinance, and our clients have years of incarceration and devastating fines hanging over their heads. The city’s disingenuous waffling is indefensible.”

The religious corporation document filed by the Knapps on Oct. 6 did not change the chapel to a non-profit entity. It continues to operate as a for-profit LLC. City officials told the Knapps that he and his wife Evelyn, both ordained ministers, are required to perform such ceremonies or face months in jail and/or thousands of dollars in fines. The city repeatedly claimed its “non-discrimination” ordinance requires the Knapps to perform same-sex wedding ceremonies now that the courts have overridden Idaho’s voter-approved constitutional amendment that affirmed marriage as the union of a man and a woman.

They “never claimed” to be anything but a for-profit business? You sure wouldn’t know that from the hundreds of articles seen in Teabagistan, where readers believe that the Hitching Post owners are pious pastors who are thisclose to prison sentences. What the ADF is doing, clearly, is using Coeur d’Alene as a test case in their campaign to invalidate public accommodation laws nationwide. The Hitching Post has all the right elements: wedding venue, small town, beleaguered mom & pop operation, ordained ministers. What the ADF hasn’t gotten, surely to their regret, are any outraged, ranting, homofascist litigants that they can point to and scream, “GAYSTAPO!”  For now, they have to twist the words of the Coeur d’Alene town attorney.

While I hope the Knapps succeed in establishing their exemption from this law, I am still shaking my head at the ADF’s framing efforts, which via Starnes set off a predictable panic about dangers to religious liberty (see also, last week, on the Houston pastors subpoena). In this instance, those efforts amount to something very akin to hiding the ball, including (as cited by Sullivan) the quiet legal revamping of the business onto a religious basis in recent weeks and the silent removal of extensive language on its website that until earlier this month had promoted the chapel as a venue for civil, non-religious wedding ceremonies. Now, the Knapps are free (or should be, in my view) to change their establishment’s business plan overnight to one that welcomes only ceremonies consistent with Foursquare Evangelical beliefs. But shouldn’t their lawyers be upfront that this is what’s going on?