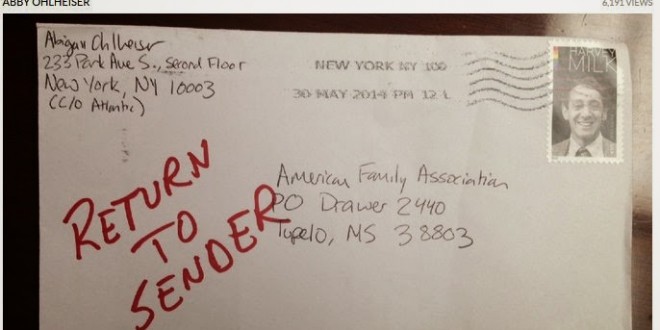 How much do anti-gay groups hate the new Harvey Milk stamps from the U.S. Postal Service? One organization refused to even open a mailed donation to their cause using one such stamp as postage. Staying true to their announcement that they would boycott all mail with the Milk stamps, the American Family Association told The Wire that the organization had mailed back our attempted $5 donation to their anti-gay group unopened. Speaking to The Wire, AFA’s Director of Issues Analysis Bryan Fischer said that the very existence of the Harvey Milk stamp was akin to “honoring Jeffrey Dahmer on a postage stamp designed to honor the culinary arts.” That’s because Fischer and the AFA, citing a line from a biography of Milk, believe that Milk was a sexual predator. “He is not somebody that should ever be honored on a postage stamp,” Fischer said.

Maybe the Wire shouldn’t have announced the attempt two weeks ago? Focus On The Family and the Family Research Council both processed Milk-stamped donations sent by the Wire.