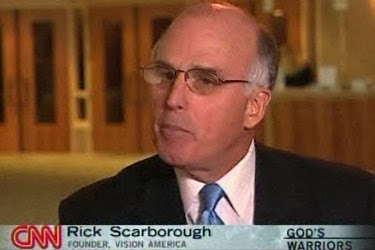 Watch out Big Gay, prepare to be served! Rick Scarborough invited Peter LaBarbera to address his Tea Party Unity group today, and the two anti-gay activists discussed ways to somehow file a “class action lawsuit” against homosexuality just like when attorneys general of many states filed a lawsuit against tobacco companies. LaBarbera was also upset that Fox News and other outlets aren’t covering the “wonderful stories of happy men and women who have left the homosexual lifestyle,” explaining that he wished there was an ad “of the kid in high school who was counseled by the official school counselor to just be gay, then he comes down with HIV.”

Previous House Stenographer: The Holy Spirit Sent Me To Deliver A Message To America
Next Photo Of The Day