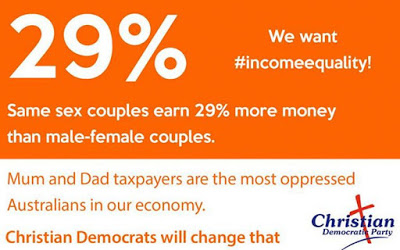 Australia’s Christian Democratic Party has issued the above graphic. Gay Star News has the story:

Far-right Australian political group the Christian Democratic Party has claimed that ‘mum and dad tax payers’ are oppressed in Australia because they earn less on average than same-sex couples according to census data – even though this means same-sex couples pay higher taxes than they do. The group, lead by New South Wales (NSW) state Member of the Legislative Council the Rev. Fred Nile made the claim in a series of election graphics attacking LGBT rights posted to social media – with others complaining about a NSW Police campaign against violence against transgender people and another quoting Russian Orthodox patriarch Kirill I.