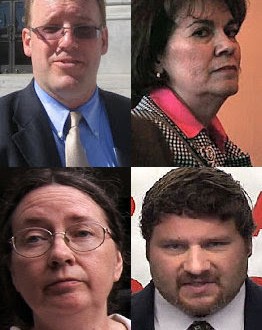 A cavalcade of crazies will tumble out of their clown car on Tuesday to march in tiny hilarious circles outside of the DC headquarters of the Human Rights Campaign in protest of Capital Pride. Christian Newswire has the press release:

“Why are so many cities proudly celebrating a harmful sexual preference that undermines health, undermines families, and leads children astray?” asks Linda Harvey, talk show host and founder of Mission America. “The Human Rights Campaign is simply wrong to continue its business of selling this lifestyle to America. There’s nothing here to be proud of, but instead, this organization should be very ashamed.” Peter LaBarbera, President of the Americans for Truth About Homosexuality, explained: “On Tuesday morning we will gather in front of the world’s most powerful homosexual lobby group, Human Rights Campaign, in Washington, D.C., during so-called ‘Gay Pride Month’ (June) to proclaim the politically incorrect truth: that proud homosexuality is against God; against Nature; very unhealthy; and a serious threat to children and religious freedom. Thankfully, it is also changeable — as proved by the existence of countless thousands of happy former ‘gay’ men and ex-lesbians.

The last time this laughably motley group got together was to protest being named to the SPLC’s list of hate groups, even though they’d previously declared that being on that list was an “honor” and a sign that they were doing God’s work. Maybe this time some actual press will show up at their press conference. DC folks – we’re gonna need photos.