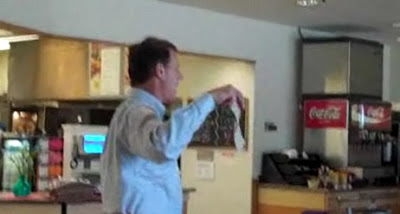 “I can call this napkin a paper towel. But it is a napkin. And why? Because it is what it is. Right? You can call it whatever you want, but it doesn’t change the character of what it is. So when people come out and say that marriage is something else — marriage is the marriage of five people, five, 10, 20. Marriage can be between fathers and daughters. Marriage can be between any two people, any four people, any 10 people, it can be any kind of relationship and we can call it marriage. But it doesn’t make it marriage. Why? Because there are certain qualities and certain things that attach to the definition of what marriage is.” – Rick Santorum, speaking to a tiny crowd of supporters in an Iowa cafeteria.