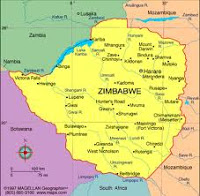 More bad news out of Africa.

Five men have been arrested in Domboshava near Harare on allegations of being gay and committing acts of sexual immorality, state controlled ZBC News reported on Tuesday. The five men include a 55-year-old white and 4 black men whose ages have not yet been released, they are currently detained at Domboshava Police Station awaiting trial. The incident happened when a bottle store owner suspected that something was wrong after seeing the young black men spending money in an unusual manner leading him to alert the police.