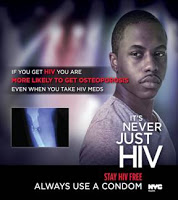 “We are very concerned with rising rates of new HIV infections in young men who have sex with men, particularly those who are African-American and Hispanic,” said Dr. Thomas Farley, New York City Health Commissioner. “More than half, 57%, of all new HIV diagnoses in New York City were among black and Hispanic men in 2009. These messages are designed to remind young men that, even with the tremendous progress that has been made in treatment for this disease, it is still dangerous and the best way to stay HIV-free is to use condoms consistently.”

Some AIDS activists have complained loudly about this campaign, saying that such scare tactics may terrify people out of getting tested. The city has placed banner ads here on JMG and I’ve gotten a number of angry emails. Below, a representative of the Department of Health defends the campaign.

UPDATE:Housing Works is very unhappy with this expansion of the campaign.

Previous The Shaving Helmet
Next Chicken Filets For Gays