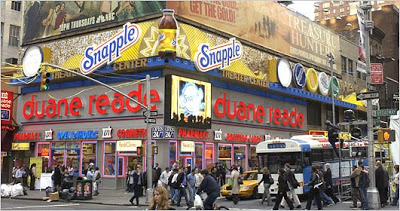 Today Walgreens will announce its purchase of Duane Reade, the massive NYC-based drugstore chain with hundreds of outlets in the five boroughs.

Walgreen, one of the nation’s biggest drugstore operators, said it would pay about $623 million for Duane Reade Holdings Inc. Including $457 million in debt held by Duane Reade, the transaction is valued at $1.08 billion. Duane Reade, which has been operating in the New York area for 50 years, is owned by a group that includes affiliates of the buyout firm Oak Hill Capital Partners. The deal, which requires regulatory approval, would include all 257 Duane Reade stores in the New York City metropolitan area, along with the corporate office and two distribution centers. Most of those stores are in Manhattan. Walgreen, based in Deerfield, Ill., operates 70 stores in the New York area and had 7,162 stores overall as of Jan. 31. The company opened a new store in Times Square in 2008.

Walgreens says that the Duane Reade stores will keep their name for now. Duane Reade was founded fifty years ago and got its name from the location of its original warehouse, which was in downtown Manhattan between Duane and Reade streets.