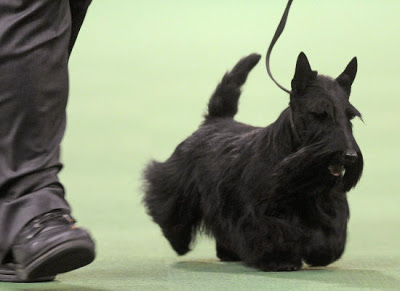 Two women walked into the center ring at Madison Square Garden and held up signs that said “Mutts Rule” and “Breeders Kill Shelter Dogs’ Chances,” the latter a slogan popularized by People for the Ethical Treatment of Animals. The crowd of 15,000 gasped at the PETA-inspired protest, then booed the women and cheered as security ushered them away without incident. The interruption lasted about a minute and was not featured on the USA Network telecast. Moments later, the 4-year-old Sadie climbed the purple best in show podium where one of the women had stood. “I thought it was well-controlled by our people,” Westminster spokesman David Frei said, without elaborating.

PETA’s own hands are scarcely clean when it comes to killing dogs, of course.