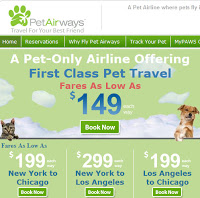 You Are Now Free To Scoot
About The Cabin* Maybe the economy isnt’ that bad if somebody can launch an all dog-and-cat airline.

Pet Airways will fly a pet between five major cities — New York, Washington, Chicago, Denver and Los Angeles. The $250 one-way fare is comparable to pet fees at the largest U.S. airlines. For owners, the big difference is service. Dogs and cats will fly in the main cabin of a Suburban Air Freight plane, retooled and lined with carriers in place of seats. Pets (about 50 on each flight) will be escorted to the plane by attendants that will check on the animals every 15 minutes during flight. The pets are given pre-boarding walks and bathroom breaks. At each of the five airports it serves, the company has created a “Pet Lounge” for future fliers to wait and sniff before flights. The company will operate out of smaller, regional airports in the five launch cities, which will mean an extra trip for most owners dropping off their pets if they are flying too. Stops in cities along the way means the pets will take longer to reach a destination than their owners.

Previous Pot Could Bring $1.4B To CA Economy
Next Death Sells