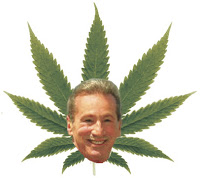 Pot Could Bring $1.4B To CA Economy Back in February, openly gay California Assemblyman Tom Ammiano proposed legalizing the sale of marijuana, a move tax experts predicted would bring in an annual $1B in desperately needed tax revenues. The tax experts were wrong.

California tax officials have found that a state bill to tax and regulate marijuana like alcohol would generate nearly $1.4 billion in revenue. A State Board of Equalization report released Wednesday estimates marijuana retail sales would bring $990 million from a $50-per-ounce fee and $392 million in sales taxes. The bill introduced by San Francisco Democratic Assemblyman Tom Ammiano in February would allow adults to legally possess, grow and sell marijuana. Ammiano has promoted the bill as a way to help bridge the state’s $26.3 billion budget shortfall.

Ammiano is rewriting his bill to remove the stipulation that the federal government must legalize pot before taxes can be collected. BTW, is $50/ounce a good price? Would that undercut the street dealers? I’ve never bought it, never enjoyed it, hate the smell, but totally support legalization.