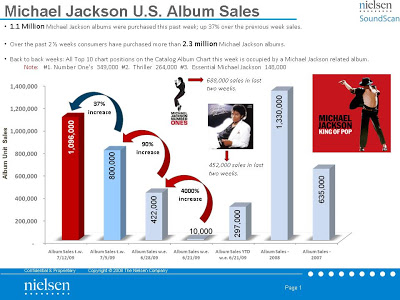 Michael Jackson sold more albums in the last two weeks than in the last two years. Almost 90% of the sales have been physical albums, as fans want a tangible keepsake. Retailers think sales may actually increase as they replace the depleted stock and widen their offerings of his back catalog. Jackson’s Number Ones is the top selling U.S. album for the third week and he owns the entire top ten of the Catalog Albums chart. A friend of mine whose company has the rights to some of Jackson’s catalog told me, “I wish he could die every week!”

Previous You Are Now Free To Scoot
About The Cabin*
Next NYT Launches TimesReader 2.0