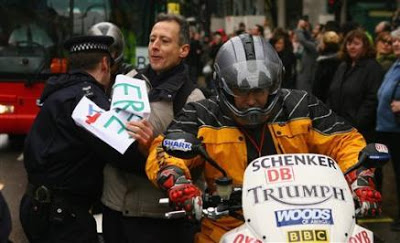 As part of a large protest against Chinese human rights abuses, activist Peter Tatchell was detained by London police today after he attempted to interrupt the relay of the Olympic torch through the streets of London.

As the torch continued westwards through London, pro-Tibet supporters waved banners and placards calling for Gordon Brown to boycott the opening ceremony, for an end to killing in Tibet and for China to have talks with the Dalai Lama. Hundreds lined Bayswater Road, many wearing Tibetan flags and carrying signs which read “Stop the killing in Tibet”, “No Olympic torch in Tibet” and “China talk to Dalai Lama”.

Helping to lead the chants was Buddhist monk Ngawang Khyentse, who said: “We can’t just remain silent. We have no other choice than to protest because there is no other voice for Tibetans inside Tibet, so we have to speak out for human rights. “At the very least the British government has to speak out and condemn the crackdown in Tibet. They must not keep silent.”

When the bus travelled along Oxford Street, human rights campaigner Peter Tatchell stopped it in its tracks by jumping into the road holding a sign saying “Free Tibet, Free Hu Jia”. “The arrest last week of human rights activist Hu Jia shows that China is not fulfilling its human rights commitments which were part of the deal for them to get the Olympics,” Mr Tatchell said. “At the very least, world leaders should boycott the opening ceremony and athletes should wear Tibetan flags when they go on the podium to receive their medals.” Mr Tatchell said he was detained by police but released with a warning.

Tatchell has made many similar high-profile protests, perhaps most famously in 1999 and 2001 when he attempted to make a citizen’s arrest of Zimbabwe president Robert Mugabe for crimes against homosexuals. The 2001 arrest attempt in Brussels resulted in Tatchell being beaten unconscious by Mugabe’s bodyguards, leaving him with permanent damage to his right eye.