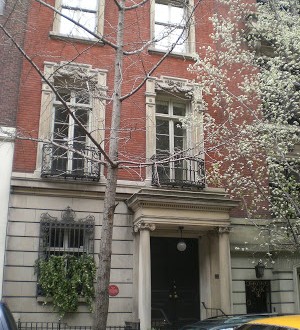 This weekend I read that Andy Warhol’s Upper East Side townhouse (bought in 1974 for $310K) was on sale for $38M so I walked over a few blocks to grab a photo. (Oh, what a difference a few blocks make on the UES.) The little red plaque to the left of the door reads: “Andy Warhol: 1928-1987. The artist most famous for his silkscreens of Jacqueline Kennedy, Marilyn Monroe, Chairman Mao and Campbell soup cans lived here from 1974 to 1987. The founder of Interview Magazine and producer of underground films such as Chelsea Girls (1966) and Trash (1970) predicted that ‘everybody will be world-famous for fifteen minutes.'” Cute little house for a mere $38 mil, eh? Four bedrooms.