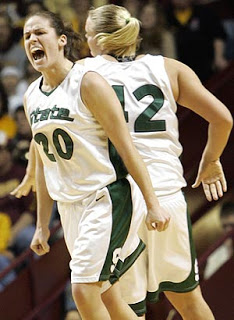 The NCAA Women’s Final Four basketball tournament is playing out in Tampa and the lady-loving-ladies are pouring into town.

The Final Four games Sunday and Tuesday will showcase the nation’s best women’s basketball match-ups. But the tournament will also usher in what is widely believed to be the largest lesbian gathering in the history of the Tampa Bay area. Other than the Dinah Shore golf weekend in Palm Springs, Calif., the women’s tournament is seen as the next biggest lesbian gathering in the nation.

The tournament is expected to bring thousands of women to the Bay area, with events and parties planned from Ybor City to Gulfport. For many lesbians coming for the games, the event is an annual pilgrimage — regardless of the final teams — that is as much about camaraderie and unity as it is about cheering for the nation’s finest college athletes.

Hosting the women’s Final Four, jokingly referred to as the lesbian Super Bowl, stirs mixed feelings among those in the local lesbian community. Some would rather de-emphasize the tournament’s historically strong ties to the lesbian community. Others wonder whether Tampa is worthy of hosting the event, and reaping the financial windfall, after the Hillsborough County Commission voted in 2005 to ban the acknowledgement of gay pride events in county buildings.

Here’s a list of what Tampa Bay party promoters have put together for lesbian basketball fans. Um, make that “lesbian fans of basketball.” Is there a difference? I kid, I kid.