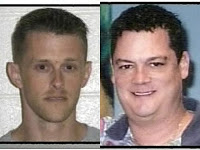 “I believe I’m Elijah, called by God to be a prophet. I believe with all my heart that I was doing the right thing.” – Terry Mark Mangum, 26, (left) arrested for the murder of 46-year old Southwest Airlines flight attendant Kenneth Cummings, Jr. (right), whose charred remains were found in a shallow grave on the Texas ranch of Mangum’s uncle. Mangum says, “I am definitely not a homosexual,” and that God asked him to carry out a code of retribution by killing a gay man, because “sexual perversion is the worst sin.”

Hate crime or insanity defense? The line between hate and crazy is thin, indeed.