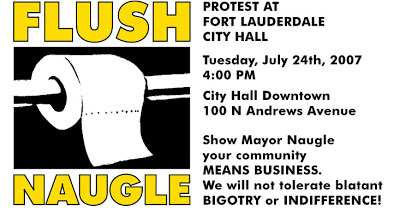 The Flush Naugle campaign has energized Fort Lauderdale’s sleepy activist community and in a way, we should thank Mayor Robo-john for that. Living in what many consider to be the nation’s gayest city, Fort Lauderdale’s LGBT folk have long been lulled into a sort of quiet bliss, enjoying the robust gay tourism trade that has been heavily courted by the Visitors and Conventions Bureau, whose materials tout the area as the “America’s top gay resort”, a claim made credible by the collapse of South Beach’s gay scene several years ago.

If you live in the tri-county area, get down to Fort La-de-da’s City Hall next Tuesday. Even if you think the Flush Naugle campaign is trifling, remember that Naugle is a servant of Dark Lord D. James Kennedy, whose slimy anti-gay tentacles hurt us nationwide.

RELATED: Back when quaaludes were the currency of gay clubbing, the town was often called “Fort Luderdale.” Then the gay spring break thing happened and the moniker morphed into “Fort Liquordale”. Now the t-shirts in the gay shops proclaim the city as “Fort Leatherdale”.
.