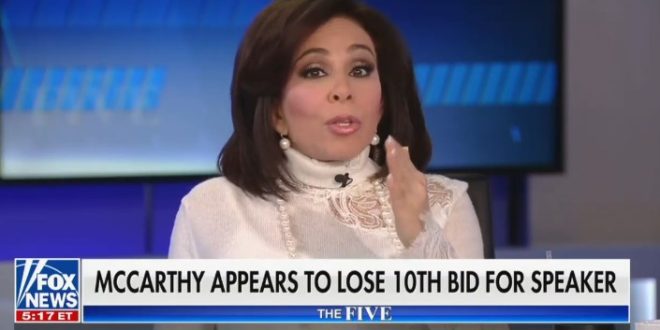 “I’m angry about it. You know why? They’re making the Republicans look ridiculous. First of all, I like Kevin McCarthy, okay?

“Why wasn’t this done ahead of time? Why are we doing this in front of the public? We look like a bunch of fools, okay?

“And Lauren Boebert, you know, with all due respect, I mean, the woman barely won her race. You’re holding out until Kevin falls. What is the alternative? What do you want?

“What is the option? What can people agree on? You want the Republicans to vote — to get the Democrats to get a Speaker of the House?

“Can you imagine Nancy Pelosi saying, ‘Let me get some Republicans so that I can be the Speaker? I can put them on committees.’

“This is an embarrassment. And I’ve got to tell you, it’s gone on long enough, it shouldn’t have happened this way.

“He’s done everything. What do they want? They have no other alternative. They’re egomaniacs who’ve got no answers and they oughta just be quiet and just go along with the majority at this point.

“If you don’t want to vote for a bill, don’t vote for it. And that’s the end of it.- Jeanine Pirro, this afternoon.