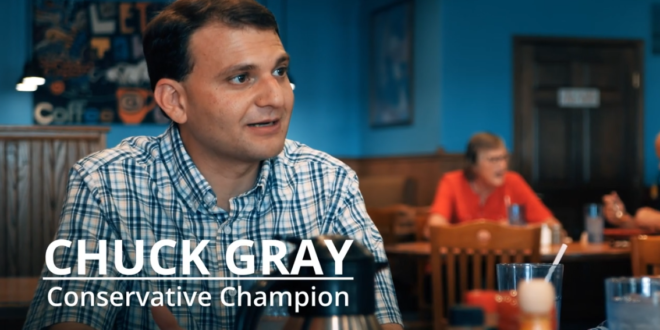 A former political radio commentator who’s the son of a Casper radio station owner, Gray has proven one of Wyoming’s most Trump-like legislators since his election to the state House in 2016.

Gray ran briefly for U.S. House in 2021, railing against Cheney after she voted to impeach the former president for the Jan. 6, 2021, insurrection. He visited Arizona to see and be seen at a recount of the 2020 presidential vote in that state.

This makes Chuck Gray the first election denier to effectively lock in a promotion to Secretary of State this year. https://t.co/rZYCEeU3oN

NYT calls it – Rep. Chuck Gray has won the race for Wyoming’s secretary of state. Gray is an election denier and ran a campaign that frequently sponsored showings of the debunked 2,000 Mules movie.

His employer has an interesting history with the office: https://t.co/vGqmgRYF6B

Gray is at least the 11th Republican nominee for state elections chief this year who has questioned, rejected or supported efforts to overturn the results. (There are 27 races.) He’s up there with the most explicit deniers, and he’s highly likely to win the job in Wyoming.