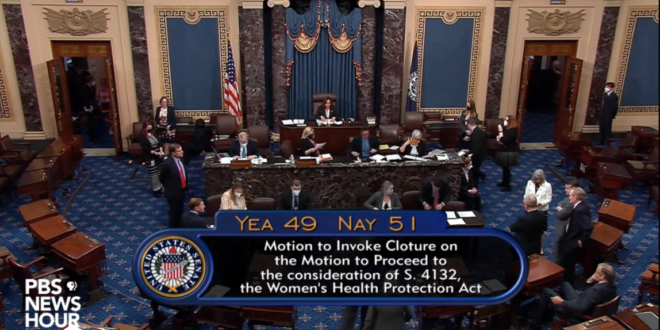 “Where’s the tolerance? Where’s compassion? Where’s the humanity?” Mr. Sasse asked on the Senate floor as he accused Democrats of promoting “brutal indifference hiding behind euphemisms” by holding on to abortion rights instead of policies that would help mothers, babies and children.

“What laws are these states prepared to pass?” Senator Patrick J. Leahy, Democrat of Vermont, asked. “What resources are they prepared to provide to support these women and the children they’ll bear? The answer, we know — and I fear — is none.”

Amid the fury of the abortion debate and the charges and countercharges of hypocrisy, it is hard to imagine the parties coming together around a bipartisan effort to ease the burdens of pregnancy and child-rearing. But Mr. Sasse still made his appeal: “Let’s do it.”

Read the full article. Manchin was the last to vote.

49-51, Senate Dems fall 11 votes shy of breaking a Republican-led filibuster to advance bill on abortion rights. Manchin the lone Democratic NO vote. No Republicans voted in the affirmative.