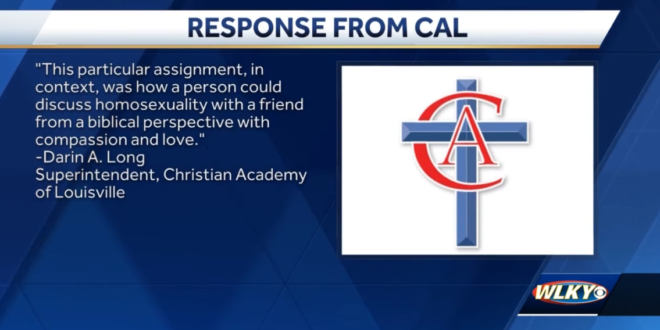 Homework Assignment At Kentucky Christian School: Write A Letter Telling Your Friend To Stop Being Gay

A homework assignment given to several middle-schoolers at Christian Academy of Louisville encourages students to persuade an imaginary friend to reject homosexuality.

The assignment, which was due Thursday, came to the light Friday, when JP Davis, a Kentucky-based business owner, posted screenshots of the assignment on social media. CAL officials confirmed the assignment late Friday afternoon.

Screenshots show the assignment required students to write a letter to a hypothetical friend “struggling with homosexuality” and persuade them “God’s design for them is good,” “homosexuality will not bring them satisfaction” and “you love them even though you don’t approve of their lifestyle.”

Read the full article. The director of Kentucky’s pro-LGBTQ Fairness Campaign responds at the end of the clip below. Listen to his chilling warning.