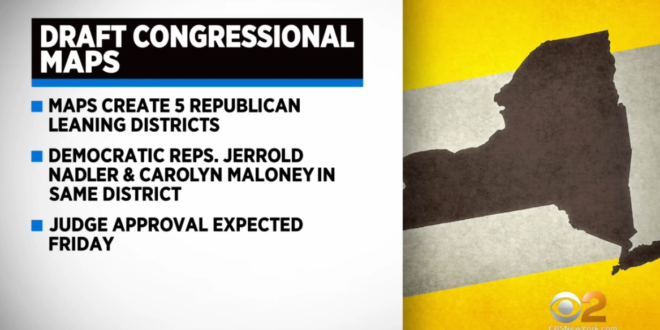 Draft NY House Map Pits Democrats Against Each Other

Reps. Carolyn Maloney and Jerry Nadler are political institutions in Manhattan and Washington, D.C., having climbed the ranks to become influential committee chairs during their respective 30-year tenures in the U.S. House of Representatives.

Soon, one of them could be out of work. Both are now running for the same House seat.

In what could be one of the more closely watched races, the mashup is the result of a newly proposed congressional map that’s sent political candidates scrambling across New York to quickly stake out their turf and figure out which of the state’s 26 districts play best to their electoral strengths.

The new maps are not final. Carnegie Mellon fellow Jonathan Cervas, a special master tasked with drawing new congressional lines following a legal challenge by Republicans, will take comments from the public before releasing a final set of plans on Friday.

The court-led process has upended a number of potential races with national implications. The state’s 26 congressional districts will play an instrumental role in whether Democrats can retain control of the House in the midterm elections.

For example, the maps give an advantage to incumbents like Republican Rep. Nicole Malliotakis compared to the prior plan that made her more vulnerable to former Rep. Max Rose, a Democrat waging a comeback bid for New York’s 11th Congressional District.

I am proud to announce that I will be running to continue to represent the 12th Congressional District. A majority of the communities in the newly redrawn NY-12 are ones I have represented for years and to which I have deep ties #NY12 #TeamMaloney

New: Rep Mondaire Jones (D) to me on SPM’s decision to run in #NY17

The chief of staff to Rep. Mondaire Jones is just tweeting through it today, taking potshots at Rep. Sean Patrick Maloney, who is leading the Democratic Party’s effort to keep the House but is also muscling into Jones’s turf in newly redistricted New Yorkhttps://t.co/ytg7kyir50 https://t.co/QVVRuau3xY

Jerry Nadler about his matchup against fellow Dem Rep. Carolyn Maloney: “It’s unfortunate, but I’m going to run and I’m going win,” he told ⁦@MZanona⁩. He said, “You do what you have to do.”
Asked if he would retire, Nadler insisted: “No, no, no.” https://t.co/Zb6Vf93mMf