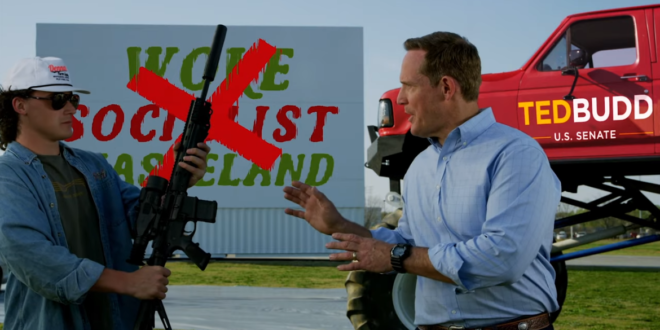 Cultist Rep: “Divisive” Cheney And Kinzinger Are Trying To “Save Something That Didn’t Need To Be Saved”

U.S. Rep. Ted Budd called his House colleagues Liz Cheney and Adam Kinzinger “divisive” Wednesday and said their work on the Jan. 6 committee is getting in the way of “freedom-loving Americans.”

“Well, I’ll tell you what, Liz (Cheney) and Adam Kinzinger have really been so divisive, you know, with this false moralism. They are trying to, you know, save something that didn’t need to be saved. It’s a false narrative.”

Budd appeared on JMG last summer when he launched his Senate campaign by posing with an assault weapon and a “Liberal Agenda Crusher” monster truck.

“They played right into the Democrats’ trap, and has made it tougher on freedom-loving Republicans,” he said. https://t.co/HT7gpfVP8b

This is Ted Budd, Donald Trump’s handpicked candidate for NC’s Senate race. A stain you can’t remove. He will be facing Cheri Beasley, former Chief Justice of NC. This is a race all Americans should follow and help Cheri if you can! #Resistance #StrongerTogether pic.twitter.com/sxaBqIhY2z

Ted Budd Sez: “Liz Cheney and Adam Kinzinger played right into the Democrats’ trap, and has made it tougher on freedom-loving Republicans, than if they had just stayed away from Nancy Pelosi’s highly partisan, highly selfish trap.” pic.twitter.com/ZQ9cPy2AOK