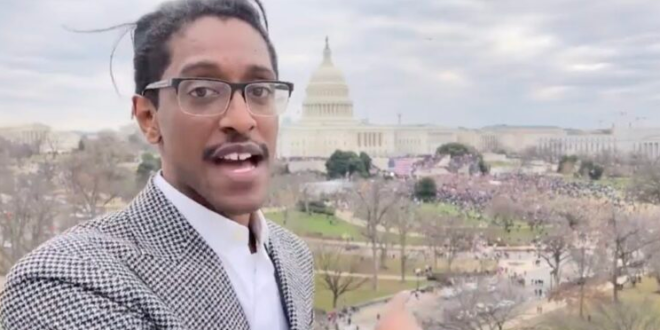 Trump loyalists were storming up the U.S. Capitol steps, fighting with police, when the far-right leader of the Stop the Steal campaign, Ali Alexander, left the Capitol steps for the terrace of One America News Network’s building on Constitution Ave. Overlooking the Capitol, Alexander pointed to the Trump loyalists streaming across the Capitol grounds, past barricades and overrunning police, before turning to the camera.

“This is we the people,” he said. “Now, I want to say something. I don’t disavow this. I do not denounce this.” This Right Wing Watch reporter captured that video, which was posted on the Stop the Steal Twitter account by Alexander’s associate Michael Coudrey at 4:26 p.m. on Jan. 6, 2021.

Now, a year later, Alexander is claiming that the video is “basically a deep fake,” telling OAN’s John Himes on Dec. 13 that “Twitter trolls” targeted him, causing him to lose everything and setting up the House select committee investigating the attack on the Capitol to come after him.

On Jan. 6, Ali Alexander surveyed the attack on the U.S. Capitol and said, “I don’t disavow this.”

Now, a year later, the leader of the so-called Stop the Steal campaign denies making those comments.

Unfortunately for him, RWW has the receipts.https://t.co/pxgPgyDvjN

This is Ali Alexander, leader of the so-called Stop the Steal campaign, saying: “I don’t disavow this. I do not denounce this.” pic.twitter.com/0mP0xThAYP