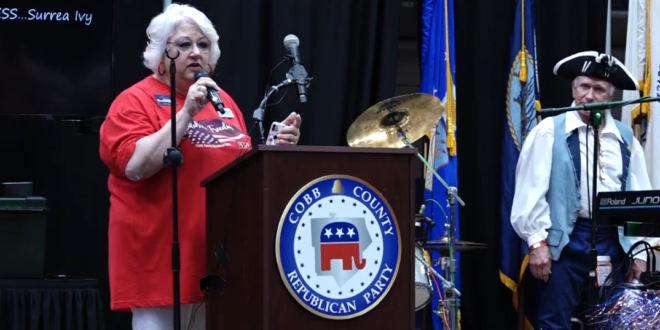 Georgia Republicans planned to spend the anniversary of the attack on the U.S. Capitol praying — not just for those killed or hurt during the Jan. 6 riot but also or the “‘J6 Prisoners” and “J6 Patriots” who stormed the building in a futile attempt to keep President Donald Trump in power.

But after bipartisan blowback, the Cobb County GOP on Wednesday canceled what it had been calling a “prayer vigil,” citing “mischaracterization of the event.”

“The intent of the Cobb GOP January 6th Candlelight Prayer Vigil is to acknowledge Americans who lost their lives and to pray for those who have been denied justice,” Chairwoman Salleigh Grubbs [photo] wrote before the event was canceled. Democratic state Rep. Teri Anulewicz called the plan an “homage to treason.”

Georgia Republicans planned a vigil for “J6 Patriots” on Jan. 6. One critic called it an “homage to treason.” https://t.co/K06XKC0SZq