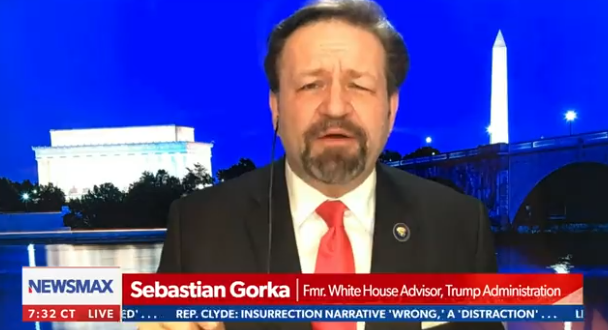 Gorka: Ted Cruz Is An Insult To The Word Conservative

“I am done. I am done with Ted Cruz. He always made me feel a little bit hinky. I know he’s super smart, he went to Harvard. But what he did is betrayed the truth when he said ‘terrorists.’ Really? Grandmothers who were arrested, put in solitary confinement?

“Did he even mention Ashli Babbitt’s name, the only person who was killed that day by a police officer? This man is an insult to the word conservative and I hope Texas tells him and that man will never ever be reelected.

“I don’t have senators on my show because most of them are asshats. I’m sorry. They all think they’re going to be a future president. The only one who’s a regular is Marsha Blackburn because she is not a politician.

“He, right now, Ted Cruz, has proven himself to be just another egotistical swamp creature.” – Sebastian Gorka, last night on Newsmax.

Gorka is currently suing the House Select Committee to block them from seeing his phone records related to the attack on the Capitol.

Sebastian Gorka said he is “done with Ted Cruz” after his comments about January 6th. pic.twitter.com/c1Y409LdQI

After @tedcruz pretended that calling the Jan 6 attackers ‘terrorists’ was a slip of the tongue, @MeidasTouch released a damning ad showing statements Cruz made throughout the entire year calling them terrorists. Meidas plans to air the spot on Fox News.
pic.twitter.com/5BDPH8fpbt