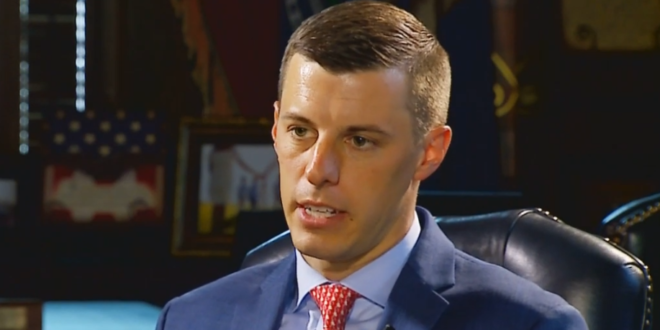 A former Michigan legislative leader on Friday denied allegations that he raped his future sister-in-law starting when she was 14 or 15, saying they had a sexual relationship for years but that both were consenting adults. Lee Chatfield, a Republican who led the House in 2019 and 2020, has had multiple extramarital affairs including with his accuser, his attorney Mary Chartier said in a statement. He “deeply regrets” his decisions that have caused “great pain” to his wife and family.

Chatfield, 33, was a teacher and the athletic director at the time before winning election to the Legislature in 2014. His father is the pastor, school superintendent and a teacher. Michigan’s legal age of consent is 16. First-degree criminal sexual conduct — the most serious offense — is defined to include a specific prohibition against a teacher assaulting a student under 16. For third-degree sexual assault, the age of consent is 18 if the perpetrator is an employee in the victim’s school.

During his tenure in the Michigan House, Chatfield loudly opposed all attempts to expand LGBTQ protections. He was removed from his first post-legislature job over his anti-LGBTQ past.

Chatfield appeared on JMG several times during 2020 for his attempts to strip Gov. Gretchen Whitmer of her pandemic-related powers.

In late November 2020, I reported that he and other Michigan GOP leaders had met with Trump at the White House to discuss overturning Biden’s win of the state.

Lee Chatfield’s record includes comparing LGBT folks to ‘adulterers, polygamists & pedophiles.’ He’s stated numerous times that discrimination does not exist, & that ‘if people in MI were being discriminated against because of their sexual orientation it would be statewide news” https://t.co/0pnKK8dR08