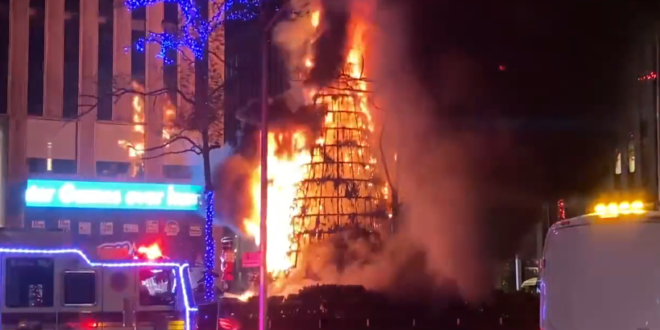 A large Christmas tree outside Fox’s Midtown headquarters was set ablaze by an arsonist who was quickly taken into custody. The 50-foot tree on Sixth Avenue went up in flames just before 12:15 a.m. Wednesday.

Heavy flames then spread to smaller decorated trees in the display. A 49-year-old man spotted by building security climbing the tree was quickly taken into custody.

The suspect is identified as 49-year-old Craig Tamanaha, who is homeless, with a last known address in Brooklyn. He is charged with criminal mischief, reckless endangerment, arson, criminal nuisance, endangering others, criminal trespass, criminal tampering and disorderly conduct.