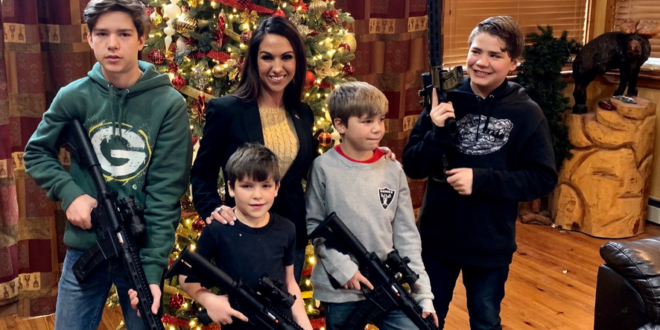 Representative Lauren Boebert (R-Colo.) released a photograph of her family holding guns on Tuesday in support of Representative Thomas Massie (R-Ky.), who had posted a similar photo days prior.

Boebert, who was elected in 2020, posted a picture on Twitter that showed herself surrounded by her four children. While Boebert herself does not appear to be holding a gun, her kids are each holding what appear to be assault rifles.

“The Boeberts have your six,@RepThomasMassie!” the tweet was captioned, with the congresswoman jokingly adding that they did not have any spare ammunition for Massie.

(No spare ammo for you, though) pic.twitter.com/EnDYuXaHDF

Our representatives competing to show the world that gun fetishism is alive and well; that exploiting your children to advance your career is ok; & teenagers that died last week are long forgotten. pic.twitter.com/1DjqGRTNJt

The fact that the four children murdered by a teenager with a gun in Michigan haven’t been buried yet means nothing to the pro-death GOP. They will kill you with guns, Covid or Fascism. https://t.co/vcUywjsLKR

Gun safety = Gun Responsibility. @laurenboebert, the monster who murdered my daughter and 16 others was inspired by photos like this. Because of your incompetence as a parent, as a responsible gun owner and as an American I definitely see a future school shooter in this photo. https://t.co/AfMB2ZnK8I

I heard four young kids were gunned down this week, so here is a photo of my kids with their guns just to say fuck you to their memories.
Sincerely,
Lauren Boebert. https://t.co/RGEEcAtA8z

My God…. it’s been just a week since America suffered yet another horrific school shooting and a second politician posts a photo of her young family parading semi-automatic weapons in front of a Christmas tree.
This is sickening. 🤬 https://t.co/NxNYLEyafI

So this is how yet another GOP politician wants to celebrate the birth of Jesus?
Pathetic. https://t.co/JpwpzTegnm

In some of #America‘s closest allies in the West, acts like this would lead to arrest & one’s children being taken into protective custody.

Beyond being a stunt, this glamorizing of guns by the right is dangerous & stunningly out of touch with their defining “Christian” values. https://t.co/2tafcDgoNM