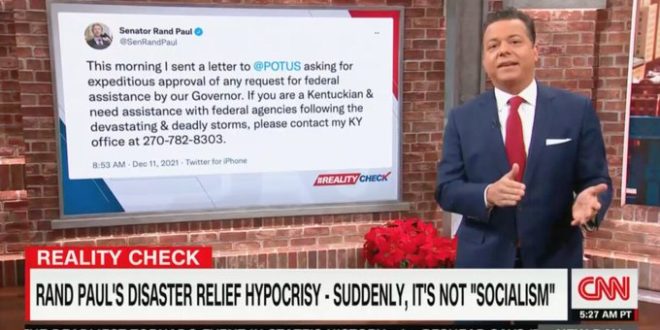 CNN’s John Avlon accused Senator Rand Paul (R-KY) of flip-flopping on federal relief now that his state has been devastated by natural disaster.

Political observers have pointed out that Paul has a history of publicly opposing relief when other areas of the country were slammed by natural calamities in the past.

Avlon made this the focus of a “Reality Check” segment on Monday’s edition of CNN’s New Day, calling Paul out for opposing relief after Superstorm Sandy and Hurricanes Maria, Irma and Harvey.

CNN’s @JohnAvlon Ridicules Rand Paul Seeking Federal Aid After Blocking It for Other Disasters: ‘Socialism For Me but Not For Thee’ https://t.co/BbvgS8IH1w

We must help Kentucky and the other states brutalized by tornadoes this weekend.

However always remember, this is who Rand Paul is when it’s your state hit with a disaster.

Kentucky Sen. Rand Paul asked for federal aid for tornado victims, which is “pretty standard,” except for the fact that he “has a long record of opposing federal aid for disaster victims,” including those hit by Hurricanes Harvey and Maria, @JohnAvlon says. #RealityCheck pic.twitter.com/P4cIZ5vrOs

Previous Musk Named Time Magazine’s Person Of The Year
Next Cultist GOP House Candidate: Christians Are “Here To Take Over” America In The Name Of Jesus [VIDEO]