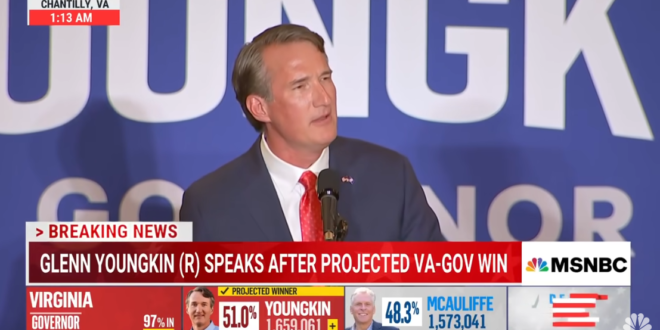 Republican Glenn Youngkin won Virginia’s election for governor Tuesday night, a massive victory for the GOP after more than a decade of political losses in the state, and an indication of significant discontent with President Biden and momentum for the Republican Party nationwide ahead of next year’s midterm elections.

Youngkin defeated Democrat Terry McAuliffe, a former Virginia governor, in a state that Biden won by 10 points just one year ago, and that current Gov. Ralph Northam, a Democrat, won by 9 points four years ago.

Youngkin was able to win back enough moderate Republicans and independents in the suburbs outside Washington, D.C. He did so by keeping his distance from former President Donald Trump without alienating those in the pro-Trump Republican grass roots.

Youngkin has used vile propaganda based on lies and fears. Is this the future of the GOP?

Yes, Youngkin did in fact run ‘on straight up racism.’ Wonder how many members of my ‘liberal’ industry will be willing to say this straight up tomorrow, in all the Virginia post mortems. https://t.co/96jAhCUN0l