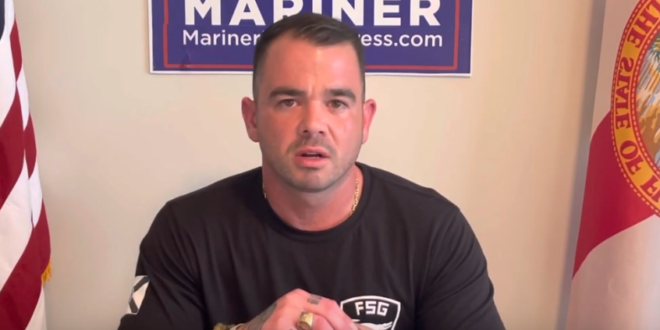 Republican congressional candidate Jason Mariner is fully eligible to hold office in the United States House of Representatives regardless of his past felony convictions, his campaign declared Wednesday.

Mariner, who won the Republican Primary Election last week in Florida’s 20th Congressional District, had his eligibility called into question because the Florida Constitution bans felons from holding office and is unclear whether a felon who has his voting rights restored can run for federal office.

In a Mariner campaign memo, attorney David Mitchel Graham of Jacksonville advises Mariner that his eligibility is assured because several precedent-setting federal court cases have found the U.S. Constitution spells out qualifications for members of the U.S. Housing of Representatives, and “non-felon” isn’t one of those qualifications.

Read the full article. Last week Mariner won the GOP primary by 16 points in the special election to replace late Rep. Alcee Hastings. The office of the Florida secretary of state has not yet updated its website to reflect his win. Mariner served two years total in prison on charges that included felony theft, burglary, cocaine possession, obstruction and violently resisting arrest.

@newtgingrich @Newsmax Not only does it appear that way, it is that way. Mainstream media STOP misleading America! Read a book. Somehow, someway, 245 years ago, the Founding Fathers had OUR back…and still do. Thanks to @Floridianpress for telling it true. #SpiritOf76 https://t.co/kPxA0TzhXY

FEDERALIST 46! We will not comply. https://t.co/DbT9Y2mkkH