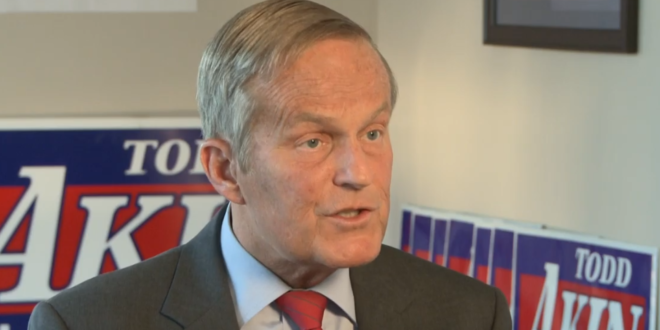 Former U.S. Rep. Todd Akin, a conservative Missouri Republican whose comment that women’s bodies have a way of avoiding pregnancies in cases of “legitimate rape” sunk his bid for the U.S. Senate and became a cautionary tale for other GOP candidates, died late Sunday. He was 74. Akin had cancer for several years, his son, Perry, said in a statement.

Akin, a strong abortion opponent, was asked by a St. Louis television station whether he supported allowing abortions for women who have been raped. He answered that “from what I understand from doctors” that such pregnancies are “really rare.” He added: “If it’s a legitimate rape, the female body has ways to try to shut that whole thing down.”

Former Republican U.S. Rep. Todd Akin of Missouri died late Sunday at age 74. He sunk his 2012 bid for Senate with a comment about “legitimate rape.” https://t.co/QLFi9ZDc5Q