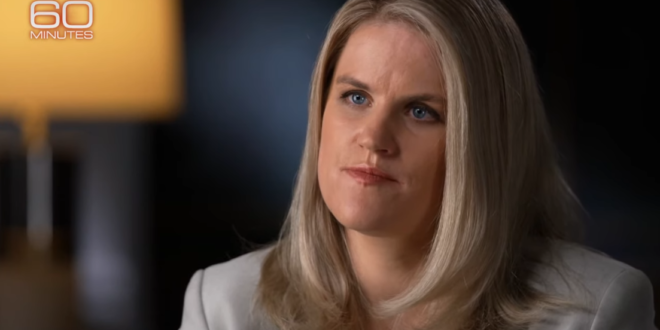 John Tye, the founder of Whistleblower Aid, a legal nonprofit that represents people seeking to expose potential lawbreaking, was contacted this spring through a mutual connection by a woman who claimed to have worked at Facebook. The woman told Mr. Tye and his team something intriguing: She had access to tens of thousands of pages of internal documents from the world’s largest social network. In a series of calls, she asked for legal protection and a path to releasing the confidential information.

Mr. Tye, who said he understood the gravity of what the woman brought “within a few minutes,” agreed to represent her and call her by the alias “Sean.” She “is a very courageous person and is taking a personal risk to hold a trillion-dollar company accountable,” he said. On Sunday, Frances Haugen revealed herself to be “Sean,” the whistle-blower against Facebook.

The 37-year-old former Facebook product manager who worked on civic integrity issues at the company says the documents show that Facebook knows its platforms are used to spread hate, violence and misinformation, and that the company has tried to hide that evidence.

“60 Minutes” correspondent Scott Pelly quoted one internal Facebook (FB) document as saying: “We have evidence from a variety of sources that hate speech, divisive political speech and misinformation on Facebook and the family of apps are affecting societies around the world.”

Revelations included documents that showed that celebrities, politicians and high profile Facebook users were treated differently by the company. The leaks revealed that moderation policies were applied differently, or not at all, to such accounts – a system known as XCheck (cross-check).

Another leak showed that Facebook was also facing a complex lawsuit from a group of its own shareholders.

The group alleges, among other things, that Facebook’s $5bn (£3.65bn) payment to the US Federal Trade Commission to resolve the Cambridge Analytica data scandal was so high because it was designed to protect Mark Zuckerberg from personal liability.

“Facebook has realized that if they change the algorithm to be safer, people will spend less time on the site, they’ll click on less ads, they’ll make less money,” Haugen said, later adding, “Facebook, over and over again, has shown it chooses profit over safety. It is subsidizing — it is paying for its profits with our safety.”

Haugen believes Facebook has contributed to divisions in society, and joined the United Nations in blaming the company for real-world ethnic violence. In 2018, the UN said Facebook played a “determining role” in the spread of hate against Rohingya in Myanmar.