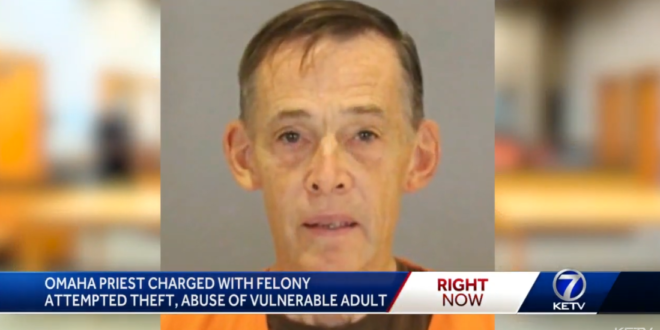 An Omaha priest was arrested Friday morning accused of stealing from an incapacitated retired priest who had willed his estate to the Archdiocese of Omaha, saying he was giving the money to a homeless man. The Rev. Michael F. Gutgsell was arrested at 7:35 a.m. Friday and taken to Douglas County Jail. He appeared in court Friday afternoon to face charges of theft and abuse, and was released on his own recognizance.

According to court documents, Gutgsell is accused of stealing $154,732 from an individual between Oct. 12, 2018, and January 2020. He faces two Class 3A felony charges: theft of $5,000 or more and abuse of a vulnerable adult. Gutgsell said he gave the money to a homeless man he had been giving his own money to, noting that the man disappeared for three months about three months after they met, documents state.

Gutgsell told investigators over a period of eight years, he paid a homeless man named Michael Barrett around $700,000 to help him with bills. Gutgsell said he would give Barrett the money in cash, usually meeting in the front seat of Gutgsell’s car parked in a downtown Omaha lot. Gutgsell told investigators he drained his own retirement account to keep providing Barrett money, and when his own funds ran out, Gutgsell turned to other accounts he controlled.

Rev. Theodore Richling’s money was willed to the archdiocese, and church officials alleged Gutgsell stole it from Richling’s estate. Richling suffered from dementia in the final years of his life. After his death in 2019, the archdiocese reported Richling was been responsible for sexual misconduct with minors earlier in his life while serving at parishes in Nebraska, including Christ the King Catholic Church in Omaha.

So far there doesn’t appear to be any evidence that the homeless man actually exists.

He has been on indefinite administrative leave since this summer.
https://t.co/vzAEJOYRvm