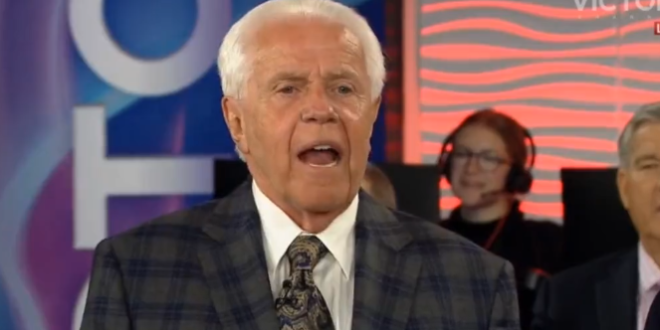 “I honestly believe this. That the reason why Jesus has not come is that people are not giving what God has told them to give. You see what I’m saying? I mean, when you understand, you can speed up the time.

“I was on television and this fellow said, ‘I heard you was millionaire.’ I said, ‘That not right. That’s not true. MULTI. Now add that to it and you’ll be all right.’

“Oh, he couldn’t handle that. He like to had a fit. I said, ‘You mess with me and I’ll buy this station and I’ll fire you.’

“That was a little fleshy but it felt good. It just did. So I realize that I will not move people emotionally to give. I’m gonna have to move people according to the word of God.

“I really believe this. If people would call this number and put this victory all over the world – every available voice, every available outlet – the Father, he would say, ‘Jesus, go get them.’

“Because you see, he wants to see us as much as we want to see him. What is hindering all this is that people are not doing what God wants to them do.

“I want Jesus to come. They say, ‘Do you own a jet?’ I say, ‘Yes, you can have it after the rapture. It’s yours.’ Cuz Jesse is going to heaven.” – Televangelist Jesse DuPlantis, who is reportedly worth $50 million.

Participating in a “Victorython” fundraiser for Kenneth Copeland’s ministry, right-wing pastor Jesse Duplantis brags about being a multi-millionaire with his own private plane while telling viewers that they can “speed up” the return of Christ by donating. pic.twitter.com/3VE6sETWBB

Previous Some Covidiots Are Now Inhaling Hydrogen Peroxide
Next Quebec Police: Man Punched Pharmacy Nurse In The Face For Giving Vax To His Wife “Without His Consent”