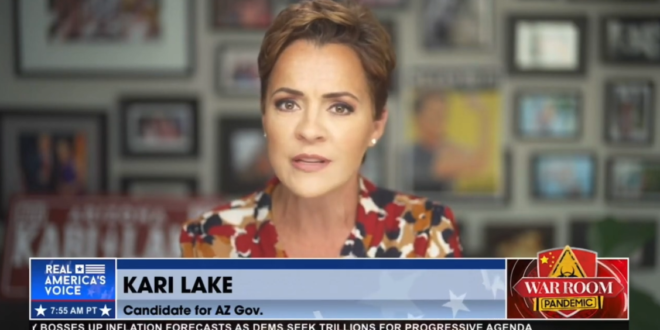 “I think Katie Hobbs is going to have a really tough time campaigning from behind bars. That’s where that woman might be in short order. She’s basically the mastermind of the 2020 election. The secretary of state oversees the election and we know and we saw it proved last Friday when we saw the forensic audit report detailed for us, all of the fraud, all of the — what appears to be criminal activity.

“I mean, who goes in the day before and deletes millions of election files the day before the audit is to begin. That is criminal. We have proof and evidence. I am a true believer that President Trump was the greatest president of our lifetime. He woke up so many people.” – QAnon Arizona gubernatorial candidate Kari Lake, who was endorsed by Trump yesterday.

Kari Lake, the now Trump-endorsed Republican candidate for Arizona Governor, called for masks to be “heaped into a pile” and burned.

Previous Canadian Anti-Vax Leader Begs “Fucking Idiots” To Stop Calling Him After Giving Number Out At Rally [VIDEO]
Next NBA: No Pay For Unvaxxed Players Who Miss Games