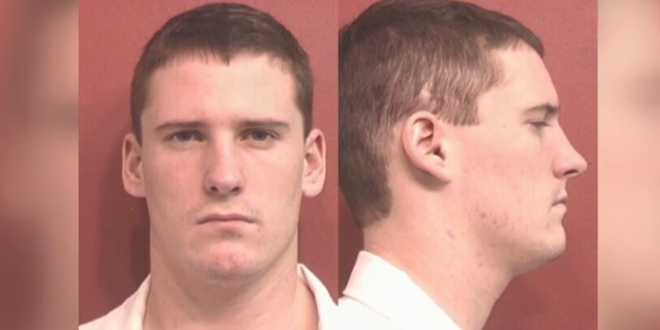 No Bail For White Nationalist Arrested Near DNC HQ

A man recently arrested after authorities allegedly found a machete and bayonet-style knife inside a pickup truck with swastikas scrawled on it outside Democratic National Committee headquarters must stay behind bars, a D.C. judge ruled on Tuesday.

U.S. Capitol police arrested California man Donald Craighead, 44, after finding his Dodge Dakota pickup truck near the DNC building around midnight on Monday. The photographs of his vehicle show it covered with neo-Nazi and white supremacist iconography.

According to an affidavit released Tuesday, Craighead told an officer that he was “on patrol.” “Why are you all pulling me over when there are brown people hurting white people?” Craighead asked, according to the affidavit.

The grandmother of an Oceanside man arrested near the Democratic National Committee headquarters in Washington, D.C., with a bayonet and a machete described her grandson as “always in trouble,” and “heading in the wrong direction his whole life.”

The Oceanside Police Department said Donald Craighead was homeless and lived in a number of San Diego communities. The address identified by Capitol Police was that of a post office in Oceanside. OPD said he has or had a P.O. box at the office.

Donald Craighead’s arrest came less than a week before a planned rally at the Capitol to support those arrested during the Jan. 6 attack on the Capitol. Police are still investigating the incident and haven’t said why Craighead was in Washington D.C., or if he was planning any sort of disturbance.

According to the second link above, Craighead has a string of prior arrests in California and Montana. The mugshot above is from one of those arrests.