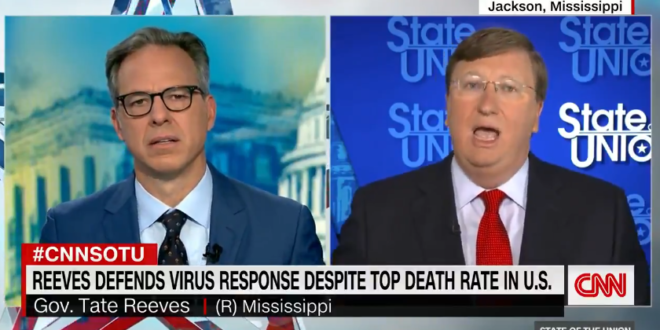 MS Gov: Vaccine Mandates Are An Attack On Workers

“The question here is not about what we do in Mississippi, it’s about what this president is trying to impose on the American worker,” Reeves said on CNN’s “State of the Union.”

“The reality is this is an attack by the president on hard-working Americans and hard-working Mississippians who he wants to choose between getting a jab in their arm and their ability to feed their families,” Reeves said.

Reeves last appeared on JMG when he declared that people in red states don’t fear COVID because “when you believe in eternal life — when you believe that living on this earth is but a blip on the screen, then you don’t have to be so scared of things.”

“If Mississippi were its own country, you would be second in the world only to Peru in terms of deaths per capita… With all due respect, governor, your way is failing.” CNN’s @jaketapper presses Mississippi GOP Gov. Tate Reeves on the state’s Covid-19 death rate. #CNNSOTU pic.twitter.com/jtbp7XbrKs

Previous Fox Poll: Majorities Back Biden On COVID Mandates
Next Eric Trump: Every Day I Get Subpoena After Subpoena