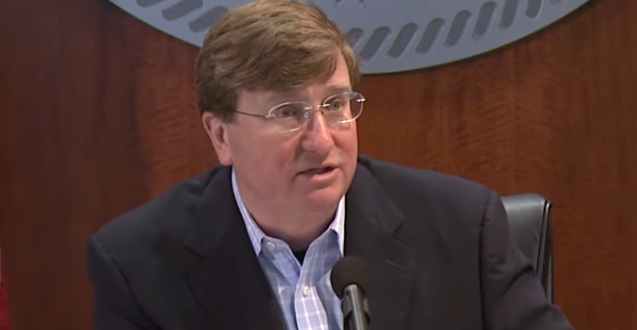 Mississippi Gov: “When You Believe In Eternal Life You Don’t Have To Be So Scared Of Things” Like COVID-19

Mississippi Gov. Tate Reeves believes religion has a lot to do with the region’s response to the COVID-19 pandemic. During a Thursday, Aug. 26, fundraiser at the Eads home of Shelby County Election Commission Chairman Brent Taylor, Reeves spoke to several dozen Republicans.

“I’m often asked by some of my friends on the other side of the aisle about COVID … and why does it seem like folks in Mississippi and maybe in the Mid-South are a little less scared, shall we say,” Reeves said.

“When you believe in eternal life — when you believe that living on this earth is but a blip on the screen, then you don’t have to be so scared of things,” he said.

The only state where the pandemic has proven deadlier than the Magnolia State is New Jersey. Mississippi displaced New York on Friday—a day after Gov. Tate Reeves told a Tennessee audience that southerners are “a little less scared” of COVID-19 due to their religious faith.

New York had led the nation in COVID-19 deaths per capita until New Jersey overtook it for the top spot in June 2020; the Empire State remained second until yesterday, when Mississippi bumped it down to third.

With Miss. hospitals at crisis levels, and a likely CAT4 hurricane bearing down, Gov Tate Reeves says that people in the Deep South are “less scared” of covid because, “When you believe in eternal life, then you don’t have to be so scared of things.”https://t.co/9rqDifF0yN