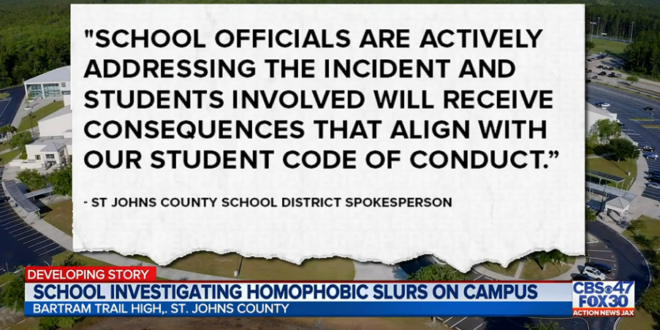 A troubling series of videos posted to social media this week appears to show a group of students hurling hate speech at other students at a St. Johns County high school. Students can be heard using homophobic slurs in the videos, which have been edited by News4Jax to shield the identities of students. Parents told News4Jax it happened Friday at Bartram Trail High School and demanded the school address what happened.

Witnesses said a group of boys at Bartram Trail High School gathered Friday to rally against the school’s Gay-Straight Alliance Club. A parent of a student there, who asked to remain anonymous to avoid backlash, called the videos chilling and said she also saw students stomping on a rainbow flag, a symbol of LGBTQ pride. A spokesperson for the St. Johns County School District told News4Jax it is looking into the matter.

A troubling series of videos posted to social media this week appears to show a group of students hurling hate speech at other students at a St. Johns County high school. https://t.co/cQkra2AZVo

TW HOMOLHOBIA THREAD: Yesterday at Bartram Trail highschool in Jacksonville Florida s group of kids stomped , spit etc a gay flag they did this while calling people the f slur and holding a confederate flag the kids names I’ve been told about are- pic.twitter.com/YA7N1PXyol

Noah Gonzalez Sebastian Parades
Taylor berger Brendan Moses those are all the names I know please spread the word make the school do something because this is not acceptable behavior kids should not have to deal with being scared about going to school and being themselves- pic.twitter.com/OwYxhDV9E9

Previous Nazis March Through Madrid’s Gayborhood [VIDEO]
Next Televangelist: God Is About To Send An “Angelic Army” To Murder The Leaders Of Every Government [VIDEO]